Untitled Project About The West 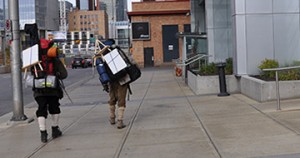 Francophones Thierry Marceau and Donald Abad will make a voyage out to Calgary and explore the great “Canadian West.” Dressed as seasoned adventurers, they will live their dream traveling across the city of Calgary, stopping at five base camps installed in high-traffic public areas in the downtown core. They will have a green screen set up at each stop and film their adventure against this back drop, keying-in preconceived landscapes of the “Canadian West” in post-production. The final video will be screened at the end of the festival during a performative lecture about the journey; regular updates and images from their daily treks will appear on the M:ST blog.

Part of the Migrant Media series for M:ST 5

Abad and Marceau investigate the individual’s place in the environment, starting with their first project together in Paris, 2004 Park in Progress. Their next collaboration was through a green screen, one was in Station VasteMonde (France), the other in a studio in Montréal, going from forest to rivers … Another time they were both in a Québec city motel, walking to the south pole (Folie/Culture, Québec 2009) … and now they are going west … to see the Rockies!

Untitled Project About The West