WORK FROM NOWHERE WORK FOR NO ONE 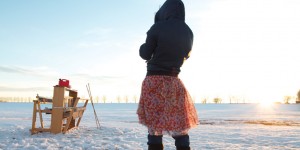 This work came from an interest in weaving, or rather, an interest in how artists and consumers who can afford it really love the intense amount of labour involved in handicrafts like weaving, to the point of fetishization. I became depressed when I realized that I normally just can’t afford the time to craft, as much as I can’t afford the time to sift through the ideas and ideals around crafting. So I took it upon myself to hastily and permanently reverse the whole textile making process, and strip it of any utopic impulses.

Looking further, this work could reference Luddites and the fabulously destructive potential of political movements. WORK FROM NOWHERE WORK FOR NO ONE is a gigantically negative act that rejects the crafting traditions from which I come from, or maybe just as much, it’s a positive gesture that inaugurates and invites people into a new craft guild of fuck ups, mischief makers, and bad asses.

Wednesday Lupypciw (Canada) is from Calgary, Alberta, where she pursues a video and performance art practice. To make money she is a part-time maid. She also maintains a concurrent practice in textiles — weaving, machine knitting, embroidery and crochet — but this is done mostly while procrastinating on other, larger projects. The performance art collective LIDS, or the Ladies Invitational Deadbeat Society, a loosely knit group of purposefully lazy womenfolk, is one of those projects. She is a Fibre program graduate from the Alberta College of Art + Design, and has worked and exhibited in various artist-run spaces throughout Canada including the Textile Museum of Canada, The Art Gallery Of Alberta, The Banff Centre, The Klondike Institution for Arts and Culture, TRUCK and Stride galleries, Harbourfront and Nuit Blanche in Toronto, and EMMEDIA.

WORK FROM NOWHERE WORK FOR NO ONE