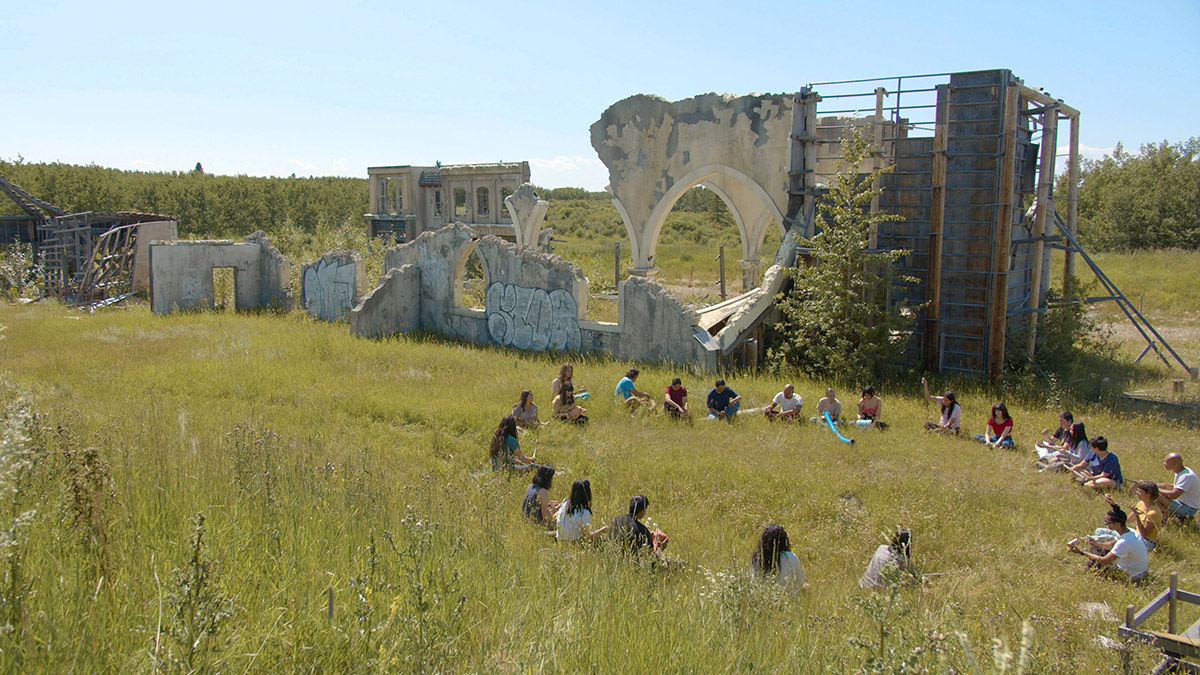 As an effort to make sure Untunnelling Vision can be accessed by as many people as possible in spite of its closure, we have made the it available online for a limited time. Click the link below to explore the exhibition, including video excerpts and the exhibition text:‍
‍

M:ST Performative Art and TRUCK Contemporary Art present Untunnelling Vision, the newest and the fourth in a series of installations by artist Jin-me Yoon that explores the intersections of militarism, colonialism, and tourism. The exhibition is the result of three years of relationship building between the artist, M:ST, TRUCK, and Tsuut’ina and Mohkinstsis|Calgary-based artists, knowledge keepers, and historians.
‍

The historical interrelations and affective intensities of a number of Treaty 7 locations are brought together in this ambitious and challenging new work: Heritage Park, the Military Museums, the Tsuut’ina Rodeo, the Ring Road construction site, a section of the Elbow River redirected due to the construction, and a film set on Tsuut’ina Nation land erected for the 2008 Canadian WWI film Passchendaele. Informed by histories of war and colonialism from Yoon’s Korean ancestry, of particular importance to this project is the Passchendaele film site, that was leased by the Canadian Armed Forces between 1910-1998 for manoeuvre trainings that utilized land and air launched rockets, grenades, and other munitions—many of which were left unexploded. Ten years after the site was returned to Tsuut’ina, ordnances were cleared, a movie set was built, and trenches were dug for Passchendaele. Now prairie grasses thrive in its village square, collapsed church, and neglected trenches.
‍

Not far from the film set is a construction site, land obtained by the City of Calgary from Tsuut’ina Nation to complete the South West Ring Road - 31 km of six and eight-lane divided highways, 14 interchanges, 49 bridges, and 1 tunnel built to join the Ring Road to the Nation. The tunnel as exemplary of a system that privileges a direct thoroughfare, often hidden and underground, appears throughout the exhibition in many guises. In an effort to make resonant and generative connections as an open response to the many sedimented narratives of these lands, these charged and varied sites play a central role in Untunnelling Vision.
‍

During production of Untunnelling Vision in August 2019, participants in a workshop led by Jin-Sun Yoon and Jin-me Yoon explored respective ancestral histories alongside the complexities of the land's many histories, mixing improvised gestures with orchestrated ones in an attempt to transform the fixed meanings of externally imposed identities and realities. Of particular note are improvised acoustic experiments by seth cardinal dodginghorse and Hanum Yoon-Henderson that provided the raw source material for the sonic elements for the main video work. Through multifaceted experiments that involved the coming together in difference of the workshop participants, the uncanny figuration of Rubble the clown, and the manifold sites, a colloquy grounded in listening, reciprocity, and relation-making with place and others emerges. In the installation, these emergences take form gathered into poetic interconnection through multiple videos, photographs, photo-sculptural elements, and objects.

This exhibition was co-produced by M:ST Performative Art and TRUCK Contemporary Art. We would like to acknowledge contributions from the Cardinal-Dodginghorse family and our project funders Canada Council for the Arts, BC Arts Council, and the Alberta Culture Anti-Racism Grant.

Jin-me Yoon is a Korean-born, Vancouver-based artist. Since the early 1990s, her lens-based practice has critically examined the construction of self and other in relation to her own direct and inherited history, as well as within broader geopolitical contexts. Unpacking stereotypical assumptions and dominant discourses, Yoon’s work has examined gender and sexuality, culture and ethnicity, citizenship and nationhood. Adopting a wider and wider lens over time, her practice has become a deep investigation into entangled local and global histories existing at specific sites within the context of transnationalism.

Presented in over 200 solo and group exhibitions, Yoon has shown her work across North America, Asia, and Australia, and in select institutions worldwide. She has delivered 80 guest lectures throughout Canada and the United States, and in Korea, Mexico, Ireland, Japan, Spain, and India. Her work is held in 17 Canadian and International public collections, including the National Gallery of Canada, Royal Ontario Museum, Vancouver Art Gallery and Seoul Museum of Art. This year, Yoon was a finalist for the prestigious Scotiabank Photography Award.

—With assistance from: CJSW 90.9, Calgary Society of Independent Filmmakers