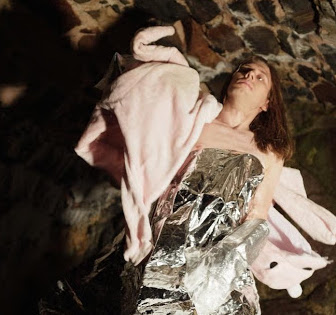 I will enter a space that I have never visited before, in a city I have never been to before, not knowing what traces will be left from the previous performances or what has happened there – I will be dealing with this situation of unknowing. I will bring with me my own body and materials, with which I am familiar, and we will be responding to this situation which is completely unfamiliar and unknown to us, experiencing how it transforms us. The performance will happen there for one day, which will be documented by my super 8 camera with a timed shutter release at regular intervals, so that the entire day’s performance will be documented on one 3 minute reel of super 8 film – the documentation itself will have gaps between each frame where it is not known what has happened during the times in between. This reel of film will be divided among the supporters of the performance, with each supporter receiving a length proportionate to the size of their donation.

I am interested in in-between-ness — in liminalities, transitions and transformations. Coming to performance from a media arts background, I feel that my practice is itself in a constant state of flux. My work covers a wide range of forms, using many diferent techniques, and can therefore be difficult to pin down. I am much more interested in exploring ideas and following a concept through from start to finish and seeing where it leads me, rather than being committed to any given style or medium.

There are, nevertheless, themes which keep coming up in my work. Gender and sexuality are frequent concerns, and I often try to challenge those perceived binaries and cross those borders. I have also become increasingly more interested in process than product. I like the idea that art exists in the act of performing artistic activity itself, rather than in any object that may be produced as an outcome.