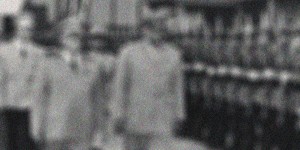 A summit is described as a meeting of heads of state or government. In our performance we evoke this idea in order to engage with the theater of current and past politics. The work that we are proposing comprises of an on-going performance intervention which would start on our way to Calgary. Once there, we will engage in everyday performative actions which will speak to and about the current political, military, social, and economic issues. We will do this in ‘costume’ which will mimic both the men’s power suite and a military uniform. Our “dictator-drag” intervenes in symbolic politics and also speaks to the fact that females are rarely seen in political, military, or economic platforms. Our work proposes to operate with two basic images — the image of the politician/dictator and that of a political/ economic summit. As such these two images evoke everything from the current violence of the Syrian regime, to the G20 Summit, political elections, or the corporate boardroom. All such images are based in power, and we choose to play with it.

Nahed Mansour is a Toronto-based multidisciplinary artist and curator. Working in video, installation, and performance, her works typically draw on visual archives to highlight the relationship between entertainment, labour, and processes of racialization and gendering. In using found images and found footage in her work, Mansour seeks to draw attention to the reproduction of social hierarchies by means of seemingly innocent forms of entertainment.

Her current project focuses on the iconography of Little Egypt, the stage name of the first belly-dancer in North America, who premiered the dance during the World's Columbian Exposition in 1893 in Chicago.

She has held the positions of Constituent Curator at the Museum of Contemporary Art Toronto Canada,  Artistic Director at the South Asian Visual Arts Centre, as well as Director of Mayworks Festival of Working People and the Arts - Toronto.

She has written for MICE (Moving Image Culture Etc.) Magazine as well as Fuse Magazine, where she sat on the editorial committee from 2011 - 2014.