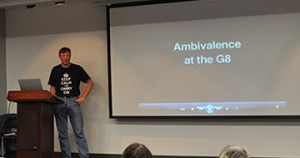 New artwork by Dick Averns from his deployment to the Middle East with Canadian peacekeeping troops. The exhibition contains photographs, sculpture, video and text portrayals of his experiences in the 2008 – 2009 Canadian Forces Artists Program. Images from Sinai, Egypt, Palestinian West Bank and Israel present challenging visions and portrayals of daily life. Averns will be performing and presenting his paper “Calibrating Official War Art and the War on Terror” with findings from his fieldwork. He suggests that the degree to which nations are willing to provide military support for contemporary artists, to gain access to the frontlines of the War on Terror, serves as a barometer for how different nations either enable or disable conflict-related cultural canons. Averns will demonstrate that official war art can provide important benchmarks for the health of liberal arts in liberal democracies.

Part of the Mimesis: Art Imitating Life Series for M:ST 5

Artist and writer Dick Averns (Canada) has exhibited, performed and presented across Canada and in the US, Australia, the UK and Egypt. As one of only five artists selected nationally for the 2008–2009 Canadian Forces Artists Program — a federally supported initiative enabling artists to work alongside Canadian military — he was deployed to the Middle East, culminating in a 2011 solo show War Art Now in the Founders’ Gallery at The Military Museums. Currently he is artist in residence at The Pembina Institute, supported by Calgary 2012 — Cultural Capital of Canada, working on a sustainable transportation public art project The 90kmh Economy Drive. Significant exhibitions include Ambivalence Blvd at the Vernon Public Art Gallery, and Art & Activism at YYZ. Born in London, UK, Dick is based in Calgary where he teaches Sculpture, Liberal Studies, First Year Studies and Drawing at the Alberta College of Art + Design. He is also a committed community activist, family guy and gardener.