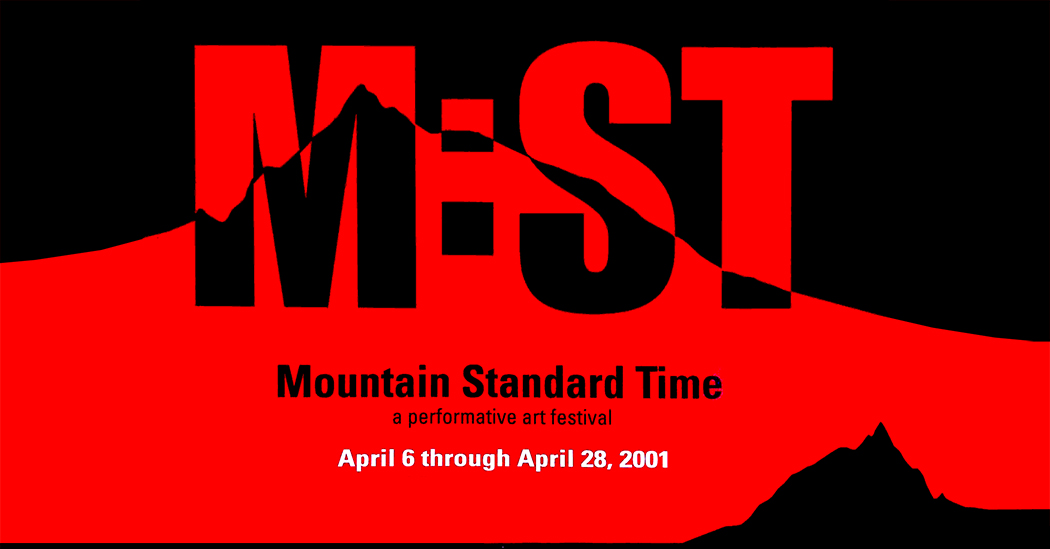 ‍
If you’ve never experienced performative art first-hand, you’re in for a full month’s worth of exceptional opportunities this month in Calgary: April 2nd marked the beginning of Mountain Standard Time (MST), Calgary’s largest festival of performance and time-based media to date, which will break new ground in a variety of ways. The 30+ events will take place in galleries and artist run centres, but also in malls, on the streets and in other public venues. These will inevitably challenge common conceptions of performance art, while also questioning dominant perceptions of reality and creating new possibilities for discussion. The mélange of techniques being explored range from the juxtaposition of spoken word, film, and experimental sound to interventions engaging the general public. MST is being organized by The New Gallery, Truck, Stride Gallery, the Nickle Arts Museum, the Art Gallery of Calgary, EMMEDIA, and the Calgary Society of Independent Filmmakers (CSIF).

Performance differs from other forms of visual art in that it often lacks the structures to enable its actualization. The New Gallery has found ways of dealing with such challenges through Space for Space, a bimonthly event keeping performance alive in Calgary. In spite of its relative success, Tammy McGrath, the gallery’s Programming Coordinator and originator of MST, denies the suggestion that she has overcome any obstacles: “I meet obstacles with Space for Space pretty much every time. . . . Getting funding [for artist fees] is one of the main ones.” Performance artists typically receive little or no money for their work, a situation McGrath and the other organizers wanted to address in finding stable funding. Their work may have paid off as funding agencies are beginning to show some enthusiasm and openness to instituting change. In addition to the Calgary Community Lottery Board’s generous grant for MST, the Canada Council for the Arts is breaking new ground in that, for the first time, they are funding a group of galleries for a collective endeavor rather than on an individual basis. The jurors of the Council’s recently formed Inter-Arts program responded very positively to McGrath’s unconventional proposal, and if the festival meets their expectations, may continue to fund similar initiatives.

‍
The collaboration of the seven art organizations is a significant circumstance, separating MST from previous performance festivals in Calgary (Media Blitz I & II in 1988-89, and EX. 120 in 1998, both The New Gallery initiatives). “I think [it] emphasizes that we have a strong community here in Calgary, that we’re working together, and it builds relationships between us and overlapping audiences,” says Stride Gallery director Robin Arseneault. Also, the scale of this festival, involving local, national and international artists, reflects an awareness of the growing importance of these media. The main advantage of having so many participants, however, is that viewers can come away with a broader understanding of the many facets of performance and time-based media, a primary consideration for the organizers during the selection process.CSIF’s contribution on the night of April 7th at the Glenbow museum will provide a concentration of genre-bending work involving the hybridization of film, live sound performance and spoken word. A must-see event, it is one of two scheduled opportunities to see this type of experimentation throughout the festival (the other being the closing party) and will include the work of three filmmakers hosted by CSIF: Daniel Barrow (Winnipeg), Alex MacKenzie (Vancouver), and Joe Kelly (Calgary). Significantly, each of these oeuvres retains the narrativeform prevalent in film but traditionally repudiated by performance. Tracy Stewart, director of CSIF, answers affirmatively to the suggestion that this may be due in part to the fact that, as filmmakers, these artists may not have the same hang-ups as they would coming from a performance or conceptual art background. However, she is quick to add, “I also think that maybe there’s a trend in performance towards the narrative, because maybe it’s not the 70s anymore, you know? I’ve done performance art myself, and there’s always been some kind of narrative structure, even if it’s a subliminal narrative structure. But with these film performances, there really is a goal for all of them to tell a story, which I think is interesting.”

Another major component of the festival is sound art, which has increasingly figured in Calgary’s performance scene, most notably at The New Gallery’s Space for Space. Ian Birse—performing Unperson at The New Gallery, April 10th—elaborates on sound’s potential, “it’s so immediate and I think physiologically, human beings respond to sound that way . . . . Sound seems to go to a more intuitive place”. Laura Kavanaugh, collaborating with Jasmin Poon for Sonic Garden at the Devonian Gardens on the 19th adds, “there is a great deal of mystery in things, and that should be allowed to happen”. Not surprisingly, many of the artists focusing on sound are residents of the city including Birse, Kavanaugh, Poon and Katy Duncan. A noteworthy exception is Bob Ostertag from San Francisco whose international reputation alone ought to attract droves to EMMEDIA on April 20th when he presents his multimedia performance, Yugoslavia Suite. Ostertag will also be hosting a workshop on Art, Technology and Music Composition the following afternoon and will appear on CJSW’s Noise With Paula program on the 19th.

‍
Perhaps the Nickle Arts Museum’s most anticipated event will be the game-show parody So You Wanna Be An Art Star, occurring on April 22nd. This satire of the competitive system governing emerging artists’ course in getting an exhibition offers the grand prize of a solo exhibition at the Nickle’s Teaching Gallery. Organized by Richard Smolinski and Linda Carreiro, the show will feature a number of emerging artists as contestants. Calvin Burns, who is coordinating the Nickle’s involvement in MST, explains that by opening the gallery to practices defying the curatorial tradition, he is able to achieve his own mandate of presenting the gallery as performer. In addition, the Museum will be hosting an artist talk on Technological Advances for New Media Artists and a panel discussion with several nationally renowned artists Paul Couillard, Tagny Duff, Marlene Madison and Don Mabie. Collaborating with students and a colleague, Kay Burns will also work off-site in MacEwan Hall on April 11th, playing video footage of the Mac Hall’s late night traffic to the daytime audience.

While it is not a new practice in performance, intervention (also known as guerilla art) remains perhaps the most salient component in this festival. Snyder locates its uniqueness in the fact that “the art finds you rather than you finding it”. Marlene Madison, a Vancouver artist hosted by Truck, will unleash her hilarious yet poignant commentary on consumer culture when she performs Chiclette, The Posh, Urban Piglet on April 21st in downtown malls along the transit route. Go shopping, she’ll find you. Similarly, Stride Gallery is sponsoring Robyn Moody from Lethbridge to set up his Brand Removal Service booth on the Stephen Avenue Mall. Moody’s job, for six days beginning on April 16th, will involve the free removal of logos from clothing, grinding of buttons on jeans, and patching over brand names that can’t be removed.

‍
An accidental blessing of this festival is that, while interest in the public sphere remains strong, performers seem to have no interest in gratuitous hostility or the use of shocking content. McGrath mentally scrolls through her list of performers and concludes, “I don’t think there are any pieces that will scar anybody . . . . I think performance artists recognize that to get a message across, you don’t have to be running naked in a field”. While most directors would like to elicit a favourable response from the public, Art Gallery of Calgary Executive Director Greg Elgstrand likely speaks for all when he confirms, “there is no attempt on the part of the festival to dumb it down, [or] to apologize for performance art”. He asserts, “the primary objective is to generate conversation . . . whether it’s a source of aggravation or celebration, because right now, [art] doesn’t figure into the public discussion”.

After the Opera / or After Definitely Not the Opera