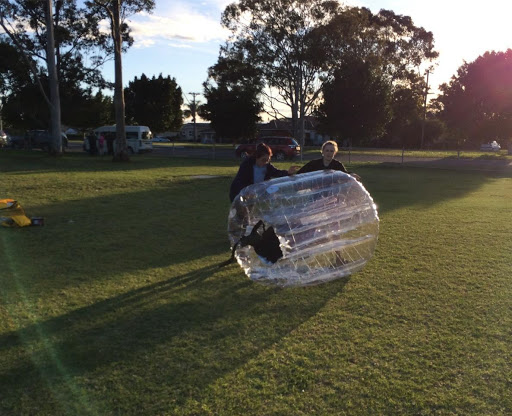 I am in the middle of an oval lying inside a clear inflated pod at dusk. The pod is both a shelter, a mode of transport and a mechanism of camouflage. There are fifty possible ovals across Melbourne, Australia I could be at within a five kilometer radius of Melbourne central business district. Fifteen minutes before each performance I will post two clues on facebook as to my location. These clues will not in themselves reveal the location but point towards online searches that through diligent trawling will provide the answer. You will have exactly forty-five minutes to find me and be the first person to roll me to the edge of the oval. If you succeed you will receive 20% (1/5) of my pledge money. You can choose to keep the money or on-donate to a charity of your choice. I will perform this act five times rain hail or shine over five weeks. Anyone, anywhere can participate remotely searching for the correct location of where I will be. If participants in Canada and elsewhere want to pair up with a Melbourne ‘finder’ this can be arranged in advance and be co-ordinated through Facebook. Bidders of $40 or more will receive a suite of documentary images of each performance.

David Cross works across performance, installation, video and photography. His practice brings together performance art and object-based environments, focusing on relationships between pleasure, the grotesque and phobia. His works often involve inflatable objects and structures that draw audiences into unexpected situations and dialogues as Cross seeks to explore contemporary experiences and understandings of participation in art.

Cross has exhibited extensively in New Zealand, Australia, Eastern Europe and the United Kingdom. He has performed in international live art festivals in Poland, Croatia and was selected as a New Zealand representative at the Prague Quadrennial in 2011. Cross was commissioned by the National Institute of Experimental Art, University of New South Wales and the City of Sydney to develop Drift, a large-scale public art commission for Taylors Square in Sydney in 2011 and his installation Lean was included in ‘The Obstinate Object’ at Wellington City Art Gallery, 2012. His work Hold was selected for inclusion in ‘Liveworks’ at Performance Space, Sydney, 2010, and featured as part of the Arts House season in the Melbourne Festival, 2012. Recent projects include commissions for Scape 7 in Christchurch, The Missing Body in Canada as well as a survey of works at MONA in Tasmania. Cross also writes on contemporary art and his curatorial projects include the large art in public space projects ‘One Day Sculpture’ across New Zealand, 2008–09 (co-directed with Claire Doherty) and ‘Iteration: Again’ in Tasmania, 2011. Cross is Professor of Visual Arts at Deakin University, Melbourne.