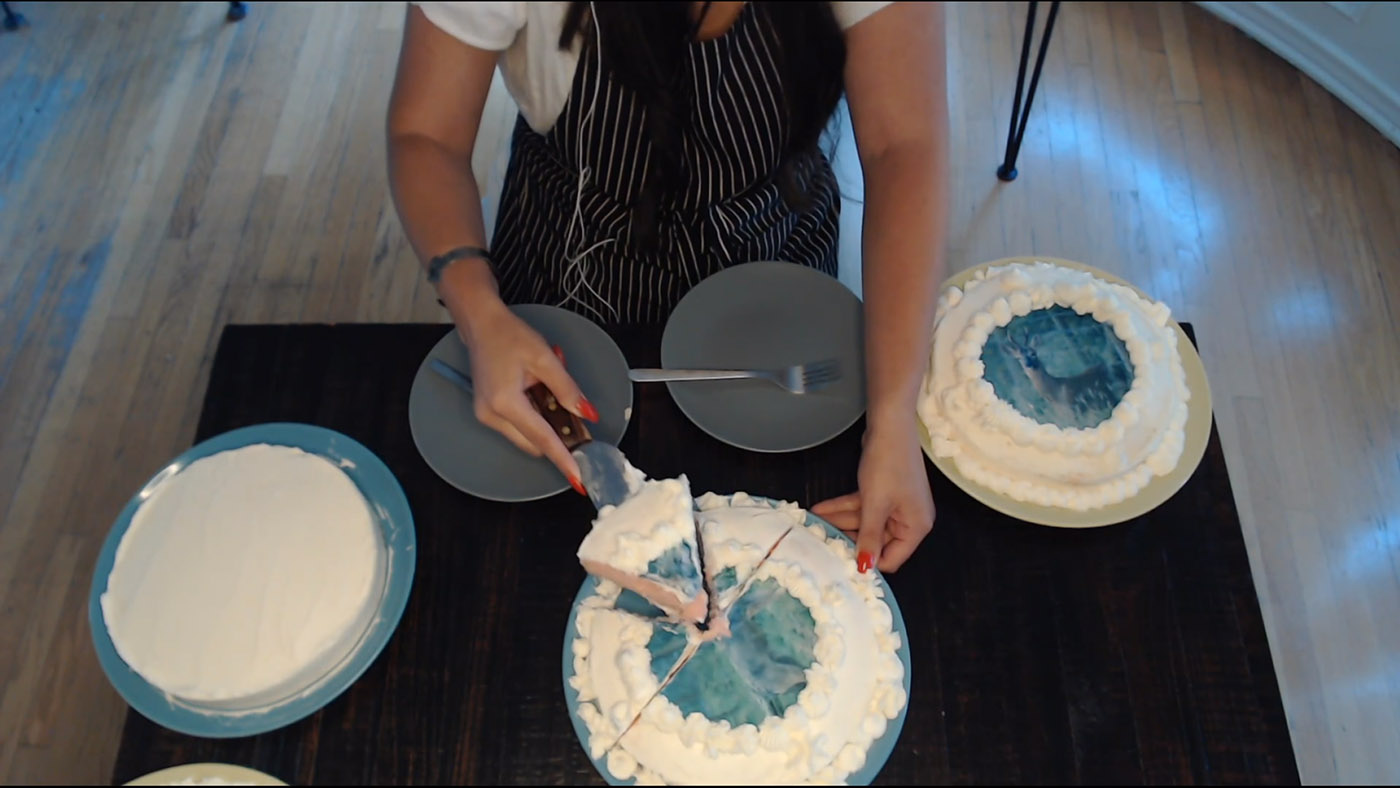 "How do I learn to mourn? How do our relatives support our mourning?"

This performance involves decorating funerary cakes while calling friends, relatives, and kin to talk about feeding others at funerals and other occasions where feeding people cake is not only contemporary tradition, but verges into the realm of protocol. As we face death in the world, Kite hopes to turn towards protocols for mourning to process the death of beings, human and non-human.

Sharing cakes at funeral wakes is a very common practice common amongst the Lakota people and other Turtle Island communities; often these cakes have an image of the deceased imprinted in the frosting. Danie Koskan writes, “The bereaved are expected to feed anyone who comes to call, and often it’s a steady stream of people paying their respects. Feeding so many people can get expensive, so some families choose to limit the wake to one night.” Lakota ceremonies for death not only purify the soul of the deceased but help to heal relatives and community members.

This cake series is the beginning of what will be a long term sculptural and performative practice where Kite will make edible and inedible funerary cakes. This practice began at the Toronto Biennial in collaboration with Althea Thauberger, where the artists mourned the death of the conch shells used in the performance by feeding the audience members cakes. For this live stream, Kite will mourn the death of the English Wolf, now extinct, and Roe Deer, which was near extinction 300 years ago. This first cake draws on Phil Deloria’s book Playing Indian, which discusses how fights for hunting rights in Great Britain led to English settlers dressing up as Indians during the American Revolution and beyond, shaping the American identity. Other cakes will be in mourning of extracted metals used when creating Artificial Intelligence, the future deaths of cancer victims as a result of Uranium mining beginning in South Dakota, and the deaths of loved ones we prepare ourselves to mourn for in the coming weeks, years, and decades.
‍
‍Date: Thursday, May 14
Time: 6:00pm MDT
Streamed from: Los Angeles, California, USA

‍Go to the home page to watch the stream and chat.

Kite aka Suzanne Kite is an Oglála Lakȟóta performance artist, visual artist, and composer raised in Southern California, with a BFA from CalArts in music composition, an MFA from Bard College’s Milton Avery Graduate School, and is a PhD candidate at Concordia University. Kite’s scholarship and practice highlights contemporary Lakota epistemologies through research-creation, computational media, and performance. Recently, Kite has been developing a body interface for movement performances, carbon fibre sculptures, immersive video and sound installations, as well as co-running the experimental electronic imprint, Unheard Records. For the inaugural 2019 Toronto Art Biennial, Kite, with Althea Thauberger, produced an installation, Call to Arms, which features audio and video recordings of their rehearsals with Her Majesty’s Canadian Ship (HMCS) York, which also consisted of a live performance with the conch shell sextet, who played the four musical scores composed by Kite. Kite has also published extensively in several journals and magazines, including in The Journal of Design and Science (MIT Press), where the award winning article, “Making Kin with Machines,” co-authored with Jason Lewis, Noelani Arista, and Archer Pechawis, was featured. Currently, she is a 2019 Pierre Elliott Trudeau Foundation Scholar.