A Levitation for Calgary & Circles of Confusion 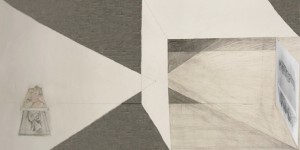 A Levitation for Calgary is part of the wider project, (A) Play of Three Magic Particles: Light, Dust, and Photographic Grain, in which Couch investigates matter, mediation and duration through performance and the body, photography, and drawing. The project explores futility, failure, and success through what is lost and gained in making and re-making, interpretation, misinterpretation and translation. The works often utilized the conceptual and physical construct of the pinhole camera and camera obscura, to create images that are often transient, elusive, and inverted, yet very physical.

Similar to a Theremin, these scratch-built oscillator circuits are controlled by light dependent sensors that modulate audible pitch and volume. Integrated into the projection system, the function of these Opto-Theremins is the real-time synthesis of discrete but complimentary dyadic sine-waveforms that are directly proportional to the intensity of the projected light — hand processed film images that are inverse matched but not mirrored pairs. Entropic by nature and not readily reproducible, this super 8 film material must be newly created for each presentation. The generative and reactionary conditions of Circles of Confusion create a hyper-awareness of the boundaries that exist between two distinct processes of sensory perception and blur the conventional divisions between them by suggesting that they are at once complementary and transmutable.

Amanda Couch’s (UK) practice is interdisciplinary in nature, straddling the domains of sculpture and performance, live and the recorded image, process, research and writing. Essentially, she make images and experiences, which are both visceral and narrative; implicit in them is a dialogue about time and being … being made, making and becoming.

Kyle Whitehead (Canada) is a multidisciplinary artist working primarily with small format cinema, installation and alternative photographic processes. His work has been exhibited both nationally and internationally, his recent film works have been showcased at the Antimatter Film Festival’s off-screen program (Victoria), the Calgary International Film Festival, Detours Santorini Super 8 Film Festival (Greece), InCINEracion (Madrid) and the 18th annual $100 Film Festival where he won the Best of Alberta award for his experimental 16mm film Maverick. Kyle received his BFA in Media Art and Digital Technologies from the Alberta College of Art + Design and currently resides in Calgary where works as the Production Coordinator at EMMEDIA and spends most of his time in the dark.

A Levitation for Calgary & Circles of Confusion